Like BBQ in general, BBQ sauce is the subject of much contention, from Carolina gold to Alabama White BBQ and Kansas City BBQ sauce.

Everyone has one barbeque sauce that stands out above the rest.

This homemade BBQ sauce stands out above the rest. It features two unique ingredients maple syrup and balsamic vinegar.

These two ingredients make plain old BBQ sauce taste like it was meant for royalty.

BBQ sauce is one of the easiest and straightforward sauces you will ever make. This barbeque sauce comes together in a few minutes.

The first ingredient of this BBQ sauce is ketchup. Ketchup is the base of most BBQ sauces. It is best to use your favorite ketchup brand.

Balsamic vinegar is the next ingredient that helps to balance out the sweetness of the maple syrup.

Liquid smoke is an absolute must for this homemade BBQ sauce. Liquid smoke adds the signature smokey flavor BBQ foods are known for.

It is made by extracting rising smoke into a condenser from the combustion chamber that is loaded with wood chips.

Smoke converts to liquid in the condenser, giving us the wonderful gift of liquid smoke.

The unami flavor is derived from anchovies or soy sauce, while the tart flavor results from tamarind and vinegar and the sweet from sugar and molasses.

A mixture of seasonings is used in this BBQ sauce.

Do I Have To Cook The BBQ Sauce?

While you could certainly whisk the ingredients for this homemade BBQ sauce in a bowl and use it as is, we recommend cooking it.

Cooking the BBQ sauce intensifies the sauce as well as thickens it.

Cooking this sauce only requires placing the ingredients into a saucepan and bringing it to a boil over medium-high heat, and allowing it to simmer over gentle for about 10 minutes.

How To Thicken Homemade BBQ Sauce

The consistency of this homemade BBQ sauce is perfect for basting your grilled or smoked goodies.

However, if you want a sauce that sticks to your food, use cornstarch. Whisk 1-2 teaspoons of cornstarch and 1 tablespoon of water in a small bowl.

Whisk the slurry into the BBQ sauce and allow it to cook for 1 minute while constantly whisking until it thickens.

How to Store Homemade BBQ Sauce 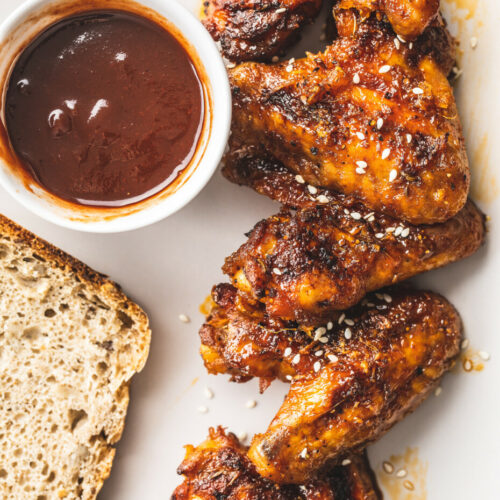 How To Thin BBQ Sauce Guide

Made this and my entire family loves it! Maybe best BBQ I have had.