In fact, we should all throw a BBQ Korean chicken party in honor of this tasty meal.

Whether you want to make Korean BBQ wings or chicken, this sauce will be delicious no matter which cut of chicken you choose.

What is Korean BBQ Chicken?

As the name implies, Korean BBQ chicken is a staple Korean dish Dak Bulgogi or Chicken Bulgogi. Dak translates to chicken, and Bulgogi translates to fire meat, and it means meat that has been thinly sliced and cooked on a grill or in a grill pan on the stovetop.

Additionally, you can also use bite-sized chicken breast or chicken thigh pieces and cook it as a stir-fry.

However, what makes this Korean chicken BBQ is the sauce.

This Korean chicken uses boneless chicken thighs. The thigh meat has a higher fat content that creates a tender and moist cut of chicken.

How To Make Korean BBQ Chicken

Simply combine all of the ingredients, pour the sauce over the chicken thighs and bake it. 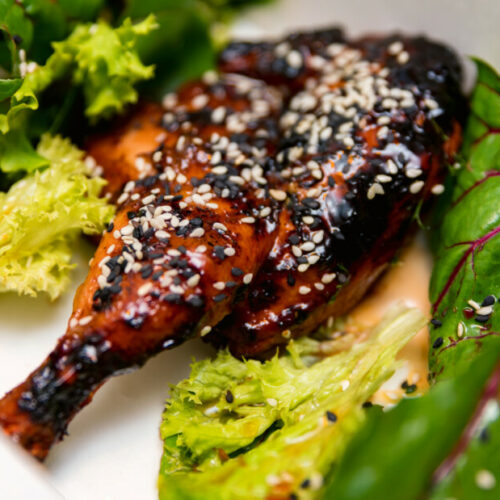 How To Reheat Rotisserie Chicken Safely

How To Tell When Chicken Is Done

[…] you are making a Korean BBQ chicken, you can use the cooking time and temperature to determine whether your chicken is […]

This was a great deal! The chicken was so soft and so tasty!