Summer is within our grasp, which means it’s grilling season.

There is no better way to open the grilling season than with grilled chicken wings slathered in tasty bbq sauce.

These barbeque chicken wings are seasoned, grilled to perfection, and slathered with a thick rosemary-infused bbq sauce.

Do You Put BBQ Sauce On Chicken Before Grilling?

While a BBQ sauce adds unparalleled flavor and texture to meat throughout the cooking and after the cooking process, this may not be the wisest decision.

Most grilling enthusiasts recommend you marinate the chicken in bbq sauce or toss the chicken wings in the sauce and baste it with more sauce as the chicken cooks.

However, this method can cause your bbq chicken wings to burn.

The way to get the perfect barbeque chicken wings is to season the chicken, grill it and baste it with the sauce during the last 15 minutes of cooking time.

How Long Does It Take To BBQ Chicken Wings On The Grill?

Depending on your grill, it can take an hour and 15 minutes to 1 hour and 30 minutes.

However, you should note if you are using charcoal or wood grill, it is best to set your fire on one side of the grill and place your wing on the opposite side of the fire to keep them away from direct heat.

This bbq chicken wing recipe uses indirect heat. The wings are arranged on the grill and cooked over medium-high heat with the cover on for 30 minutes.

The wings are then basted with the rosemary-infused bbq sauce and cooked until they are lightly charred. 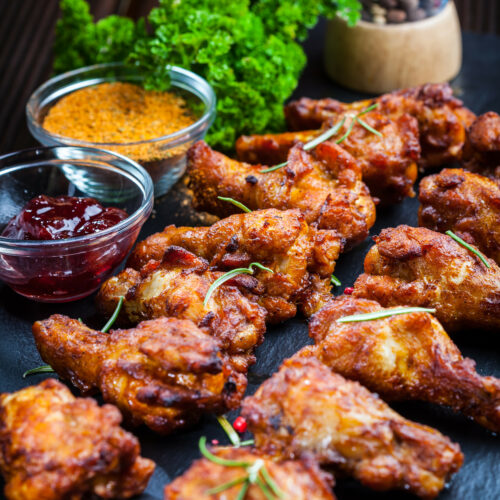 How To Defrost a Chicken Safely

[…] chicken pieces such as the wings, breast, legs, and thighs can last in the freezer for up to 6 […]

How Long To Marinate Chicken Guide

[…] Chicken wings are most often marinated using acidic ingredients. However, there are several different kinds of marinades for chicken wings. […]

How Long To Smoke Chicken Wings At 275

The 10 Best BBQ in Toronto

[…] smoked chicken wings, ranger waffle fries, and the Lonestar burgers have an unforgettable taste. The ambiance of outdoor […]